SMOG in California: Smoke and Fog, Some History

SMOG, you may or may not know, comes from two words: “Smoke” and “Fog.” It was coned in the early 20th century, and over time it came to be associated with the city of Los Angeles, the world capital of SMOG as it were, especially in the 1960s. With Los Angeles situated as it is in a basin, and with insufficient winds to blow the SMOG away, the city of automobiles began to suffer from high concentrations of pollution as the automotive revolution really took hold. Thus was born: SMOG.

SMOG Check, of course, is California’s program requiring all vehicles to comply with certain regulatory requirements to combat SMOG. As a SMOG Check station or participant in the Bureau of Automotive Repair’s STAR program, you are helping to keep the state in good air quality. You should be proud of what you do: you are an important combatant in the war against pollution. It’s unfortunate that at times you might seem “at war” with the Bureau of Automotive Repair, but let’s leave that aside for a moment.

As attorneys working in Bureau of Automotive Repair cases, both administrative and criminal, we are often used for our expertise in the in’s and out’s of the government regulations concerning the SMOG check programs. Station owners and technicians turn to us. But what about SMOG? What is the origin on this word, and what has it come to mean? 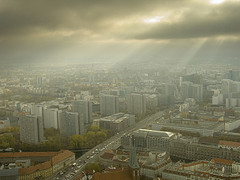 SMOG comes from “smoke” and “fog,” of course, but in Los Angeles and most of California one of its primary components is vehicle emissions. When a weather inversion hits Los Angeles, (meaning that the air is literally trapped), then the pollution from the area’s millions of cars, has nowhere to go. At that point the South Coast AQMD (Air Quality Management District) may issue a “smog alert.”  If you’re up for it, you can check their historical page on SMOG. Another good resource on the issue is the California Air Resources Board. For a historical look at SMOG in Los Angeles, read “Los Angeles Smoggy Past: In Photos.”

The Ingredients of SMOG

The ingredients for SMOG, therefore are –

The SMOG check program originated in the struggle against SMOG. By being a SMOG check station, you are helping the state in its struggle against pollution. So be proud. And, of course, if you have issues with the Bureau of Automotive Repair and regulatory concerns, call or email us. We can help.