Undercover Cars Used by the Bureau of Automotive Repair: Some PDFs

It is relatively common knowledge among the SMOG check community that the Bureau of Automotive Repair conducts “sting” operations using undercover cars. Basically, a car may come into a SMOG Check or STAR participant station, and – unbeknownst to the technician and/or owner – this car isn’t really that of a consumer. Rather the car is being used by the Bureau of Automotive Repair in an investigative way. Leaving aside the legalities and facts of the use of these cars, we just want to draw your attention to their reality. A few station owners may not know that this practice exists, until it is ‘too late,’ in the sense that they have encountered a car. After all, if you ‘pass,’ so to speak, you’ll never know that the car you SMOGGED was actually an undercover car. If you ‘fail,’ then that’s a different matter.

Note that these cars may be used both for faulty repair allegations AND for faulty SMOG check allegations. There are different sorts of encounters.

Undercover Operations by the Bureau of Automotive Repair: Some PDFs

Among the ways you can learn about these cars is to peruse the information that is publicly available on the Bureau of Automotive Repair website. Here are some interesting PDF’s to read –

Now, as lay people, we aren’t necessarily able to really understand the legal goings on here. That’s not the point. The point is to show how with the miracle of Google, you can find direct evidence that these cars exist and are used. You can also see that their use comes into the fore in terms of legal actions.  Here’s a screenshot, for example, discussing the use of undercover operations: 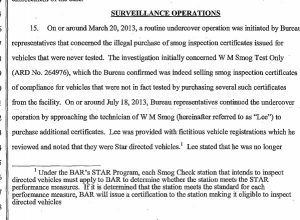