Received an Accusation from the Bureau of Automotive Repair? Check Google

The Bureau of Automotive Repair is, of course, charged with regulating California’s SMOG check and STAR program participant stations. If you are a station owner or technician, you probably already know that. Your encounters with the Bureau may have been limited to licensing issues. However, station owners or technicians may receive many types of correspondence from the Bureau, and they go by various names amongst the lay people. You might think just plainly that you have received a “letter” or a “complaint” from the Bureau of Automotive Repair alleging that you incorrectly SMOGGED a vehicle. The Bureau is known to send out so-called “undercover cars,” for example, and these cars are meant to catch technicians who are not doing a proper job. We’ll leave aside how ethical this practice is.

What we’d like to draw your attention to is the whole notion of an “accusation.” We’re not going to explain this all in terms of the legal concepts, but we’ll just stick closely to the more common definitions here. If you have received ANY sort of official correspondence from the BAR, you should consult an attorney immediately. Every situation is unique and different, and you want to tread carefully when dealing with the Bureau. Even what might seem like an innocent interchange between you and them could spell trouble for you down the road. They have attorneys.  You may not (at least if you choose to try to handle this yourself).

But let’s return to the accusation thing. Just for grins and giggles, you might try this search. Go to Google. Type in “Bureau of Automotive Repair Accusation.” You’ll find a string of Adobe PDF documents which are various decisions and legal papers concerning accusations made by the Bureau. Now, you – as a lay person – won’t fully understand everything you’re reading. It’s a lot of legalese, of course. But take a gander, and scroll through some of these publically-available documents.  For example: 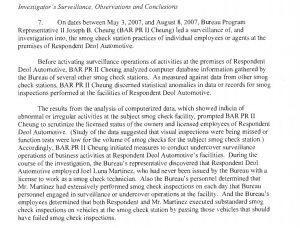 You can click on the image to enlarge it.  Note a few facts. First, note that the Bureau of Automotive Repair led a surveillance of and investigation into the SMOG check practices of an individual station. Second, note that the way this station was selected was through “statistical anomalies” in data or records. Third, this combined with alleged licensing abnormalities prompted the use of “undercover surveillance” of the station.  Now, again let’s leave aside the legal and factual issues, here. The point to make is that the Bureau regularly monitors stations for compliance, uses computers to detect “anomalies” and conducts undercover surveillance of stations. It’s almost as if before a crime is committed, there is a “sting” operation at work, isn’t there? There is no indication, for example, that officials reached out to the station to discuss these computer anomalies before undercover cars were used. Again, we’re not making a legal or even a factual argument here. We’re just drawing attention to the accusation process “on the ground,” and reminding you – as the station owner or possibly the SMOG check – that any correspondence or interaction with the Bureau is not to be taken lightly.  For more interesting reading, the Google search is here. The document above was retried on 3/21/2016.