“Los Angeles” and “SMOG” are often to be found in the same sentence, given that the city has suffered from it for many a long year. You can check the Los Angeles air quality online. In fact, Los Angeles has been described as the birthplace of SMOG, which is somewhat unkind because it is not alone. 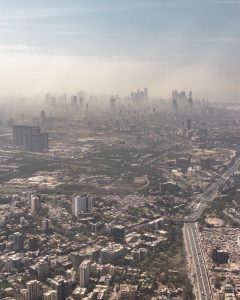 Indeed, in London, England, back in the first half of the 20th century, the London SMOG was really bad. In January or February, if you walked down Oxford Street in London’s West End there were some days when you could hold your hand out at arm’s length in front of your face and you could hardly see your hand! Strange but true.

Even so, Los Angeles and Smog were very often together at around those times. According to Wikipedia, “Smog is often categorized as being either summer smog or winter smog. Summer smog is primarily associated with the photochemical formation of ozone”. In winter, when the weather is cooler, buildings can be heated with coal and other fossil fuels which produces emissions.

In Los Angeles, Smog is a type of air pollution that is caused by a combination of emissions from vehicle combustion engines and industrial fumes which react with sunlight and form photochemical Smog. In other cities, such as Delhi, for example, it is caused by stubble burning in nearby agricultural areas. Smog is usually toxic to humans and can lead to severe illness and even death.

Smog Has Been Around for a Long Time

Smog has also been around longer than you might think. Again, according to Wikipedia “On 17 December 1881, in the (UK) publication Sporting Times, the author claims to have invented the word: “The ‘Smog’ – a word I have invented, combined of smoke and fog, to designate the London atmosphere…”. Yes, we were burning a lot of coal even then.

So, “Los Angeles and Smog” is not the only combination there could be. We have had some serious Smog in the past, but of course today we have the laws that require vehicle emissions to be kept to a minimum in order to combat it. This, of course is overseen by the Bureau of Automotive Repair, among others, which licenses auto repair shops and SMOG stations, which from the point of view of the health of the population is a good thing. The Smog has decreased considerably over the last 50 years since the BAR was formed in 1972.

At Automotive Defense Specialists, we don’t like Smog any more than the next guy. And of course, the Smog regulations have vastly improved the condition of our air. However, there is also no doubt that the Bureau of Automotive Repair can be said to go “over the top” on some occasions, endeavoring to put auto repair technicians and shops out of business for failures regarding Smog testing.

These are often ill-founded, so if your auto repair business is suffering from harassment by the Bureau of Automotive Repair, we can help you fight against any unjust claims.