Many SMOG stations and STAR Program participants are expressing concerning over the regulatory environment between the BAR97 machine and the newer OIS (On-board Diagnostic Inspection System) machine, especially controversy as to when each machine is required to be used. In some situations, the Bureau of Automotive Repair can express concerns about the proper or improper use of the correct machine. As part of our blog commitment to informational updates for the SMOG check industry in California, here is some basic information on how the citation process works on this timely issue.

The Citation appeals are a two step process. First is the Informal Citation Appeal. This process generally takes a month or two. Once this process is completed, if a station is unsuccessful at the informal level, citations are then can be formally appealed. Formal appeals are forwarded to the Attorney General’s (AG) Office, as the AG will represent the Bureau of Automotive Repair for administrative hearings.

We have seen a significant number of these appeals overturned at the informal level. Sometimes it is because this is the first citation a facility has received. Other times we have been able to get citations dismissed due to technical and statutory arguments regarding the ability of the BAR to issue the citation in question. 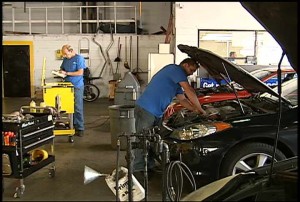 First and foremost, these citations are being issued under section 44012 of the health and safety code.

Simply put, if a facility is issued a Citation under 44012, the BAR can invalidate their STAR Certification as a result.  However, if we look at eligibility:

Basically, this statute grants you access to the STAR program as long as one year has passed since the Citation became effective.  However, there is one additional statute that impacts your STAR

Now the BAR has issued some guidance on the STAR Certification issue through its website:

5.3 Will my station’s STAR certification be affected if an inspector at my station receives a citation?

It depends on the citation. Applicable citations are detailed in §3392.5.1(a)(1) of the California Code of Regulations. Note that among the applicable citations, a single citation with an order of abatement issued to an inspector typically would not affect a station’s STAR certification. Testing a 2000 and newer model-year gasoline-powered vehicle, or 1998 and newer model-year diesel vehicle on the BAR-97 Emission Inspection System (EIS) instead of the required OBD Inspection System (OIS) usually results in a citation with an order of abatement. However, citations for other reasons or multiple citations for failing to test on the OIS can be cause for invalidation of a station’s STAR certification.

Despite the law being extremely clear that one violation under Health and Safety code §44012 is cause for invalidation, they are attempting to suggest that “typically would not affect a station’s STAR certification.”

Basically, they are telling you it won’t typically when on the other hand if they chose to, they can take STAR. Simply put, … the BAR may not want you to not appeal this citation and let them decide if they want to revoke STAR.

To summarize, based upon our experience in similar cases, you can expect at least 18 months to pass from the day you receive a citation before your STAR Certification may be impacted as a result of the Citation. There are so many of these cases it will likely backlog these cases even longer. Understanding that the BAR97 test is a more thorough test that includes the OBDII functional check that is genesis of the DAD/OIS test, there can be confidence of disputing any possible citation.