(We’re hearing reports of citations for using the old machine (using BAR 97 instead of the OIS new system), which are now being used to invalidate STAR even though the BAR originally said they would not use it to invalidate STAR).

Let’s face it – The Bureau of Automotive Repair (BAR for short) – is a government agency. It’s run by the government, it has government employees, and it thinks like the government. The people who work there – generally speaking – have spent most of their life in public service, working for the government… they don’t know what it’s like to run a small business, they don’t see the hassles and confusion of regulation from the perspective of a hard-working SMOG technician or STAR Program station. They just think and act like government regulators: doing their job, interpreting regulations and proliferating more government ad infinitum. They’re not evil, they’re not good… they’re cogs in a wheel of this great state of California, regulating folks just like you.

One of the more complicated and timely issues is called BAR 97 Citations. As you probably know:

We are getting more and more inquiries from stations that are receiving BAR citations over the complexity of the BAR-97 EIS requirement.  Here’s the irony: many stations are getting into trouble for running the BAR97 test instead of the OIS test, even though the former includes the latter and is essentially inclusive. Basically, the BAR 97 test includes the OIS based test plus an emissions probe sample test. So there is an extra requirement for the BAR97 test. All of my clients the car passed the more stringent test, so really, there is no harm and no fould because the BAR 97 test includes the OIS test.

Government Regulations: Can Be Complex 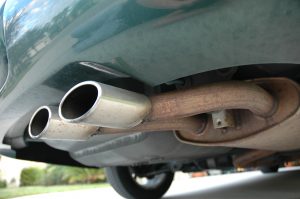 Being involved in the SMOG check industry, means being involved in a lot of complicated government regulation. And sometimes the most difficult question to ask is: why? On a practical level, there might be little logic in one over the other: the car would pass both, so it’s sort of ‘no harm, no foul’ from a practical perspective.

However, what needs to be made clear is that the BAR is going to go forward and prosecute these cases. They will retain the Department of Justice, the Attorney General’s office, who will prosecute these cases. They will bring Bureua of Automotive Repair witnesses to say the OIS test is the updated test required to be used. The facility violated the BAR regulations by using the old test. The shop knows, the bar knows, the attorney general probably knows, that the OIS test is less thorough than the BAR97, but the Judge may not know the test. The BAR they will make it seem like the shop or technician is the devil for not using the more “updated” test.

Now, remember this is a legal proceeding. It’s not a bunch of guys sitting down over a coffee, and arguing the merits of this or that test. It’s a government hearing with all sorts of formal rules and regulations (which you, as a station owner, probably do not understand).

This is a formal court proceeding. There will be sworn witnesses and a court reporter taking down every word that is said. There are rules of evidence. There are hearsay rules, foundation of evidence rules, the need for expert witnesses who do not demonstrate bias (that the shop or technician will have built in), you will need to object to questions by the Attorney General who will try and get in speculative or inadmissiable statements and evidence. The shop or technician will need to lay the foundation for evidence. Introduce proper documents according to court procedures. Cross examine Bureau of Automotive Repair witnesses to support the defense. Deliver an opening and closing argument to tie it all together for the judge – who again, knows nothing about these tests. This is not a BAR judge. This is not someone who knows about these cases. You will need to start from ground zero in educating the judge.

Can you do this? Effectively? When you’re up against BAR attorneys that do this every single day for a living? Who get a steady paycheck win or lose? Who aren’t missing business by showing up in Court?

Probably not.  And certainly not with the skill of an attorney who provides effective legal representation in Bureau of Automotive Repair actions, as we do. You hire a specialist to fix your car, to fix your dish washer, even to wash your car (at some point)… A specialized attorney can be a great assistance in these actions, helping to explain complex issues to a judge such as BAR 97 vs. the OIS test and all issues contained in between.

Contact us via email or call 800-561-9860 for a free consultation on your Bureau of Automotive issues.